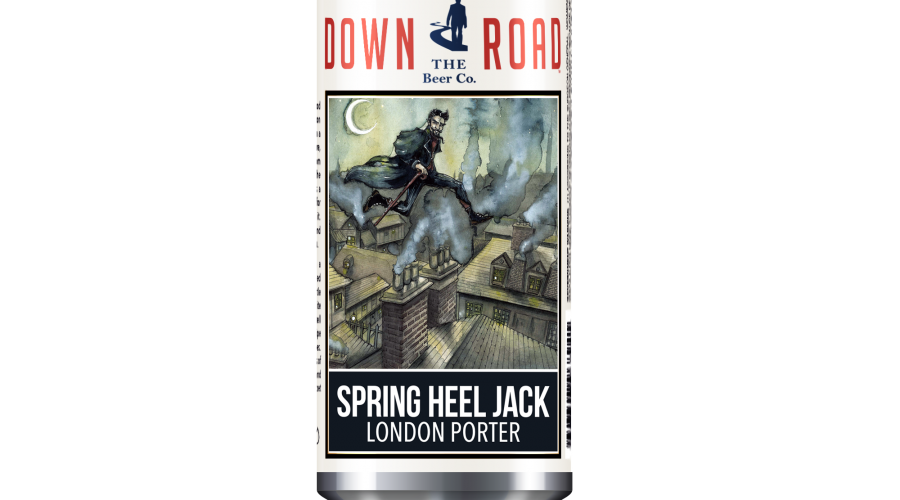 Join us for the tapping of Down the Road’s Spring Heel Jack’s London Porter at Dorchester Brewing Company on Friday, December 9th! We’ll have some awesome Down the Road merch to raffle off including branded glassware, hats and T-shirts!

Down The Road announces the release of its Winter seasonal – Spring Heel Jack’s London Porter (6.5%ABV.) This dark, malty brew features strong notes of coffee, chocolate, caramel and fruit, and is the perfect companion to lazy snow days spent hearthside.  “So much of the porter market is cornered by barrel-aged booze bombs, but we wanted to make something more traditional with a London Style Porter.” explains Donovan Bailey, founder and head brewer of Down The Road. Spring Heel Jack’s London Porter hits the mark by drawing on centuries of English brewing heritage with no quirky ingredients, balanced hops and rich malts. Spring Heel Jack pours as black as the soul of its namesake. Herbal Fuggle hops uplift the heavy body of Chocolate and Black malts, and English Ale yeast finishes the brew with dry fruity esters.

But who is “Spring Heel Jack,” you may wonder. The Terror of London, AKA Spring Heeled Jack was a mischief maker of the 19th century who ascended to the status of legend in near countless Penny Dreadful stories. What started as a mischievous rogue, evolved into a near supernatural devil who could leap buildings in a single bound. In fact, the people of London were so terrified of his possible existence, that in 1838, the Mayor of London enlisted the aid of the police to search out the devil and offered a reward for tips on the rogue’s whereabouts.