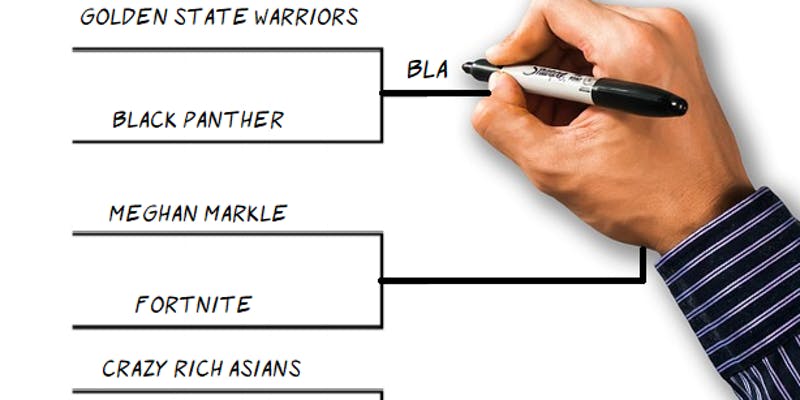 Enough discussion about boring stuff like taxes and public health, let’s have an open debate on the thing that really matters: Figuring out who won 2018.

What does that phrase mean? It means who had the most impressive year? Who makes you look back at the last 365 days and go, “Yeah… they crushed it.”

On January 9th, we’re coming to Dorchester Brewing and we’re solving this conundrum by opening the floor to the people. At the front of the room will sit an NCAA-tournament-style bracket listing contenders for who won the year. It might include options like Black Panther, Meghan Markle, Fortnite, the Golden State Warriors and more. For each entry we announce the matchup then take arguments. Anyone in attendance can raise their hand and make the case for the side they think should win. When the dust settles on everyone’s opinions, we vote by show of hands, with the winner going on to the next round.

The only rules: Keep your arguments brief and keep them friendly.

At the end of the night, one option will remain and that is your winner.

What makes over-the-top debates about things that don’t really matter even better? You know what: booze. Your ticket comes with a token good for a free beer of your choice (gratuity included) at Dorchester Brewing- the creators behind many of your favorite labels as well as some of their own in-house specialties.

Now we know what you’re thinking: You’re thinking 2018 was a rough year and this could lead us down some sad paths, so we are leaving anything remotely political out of this. This is about the fun stuff. We’ll feature contenders from movies, sports, pop culture, tech, innovation, and everyday life. The darkest we’ll get is when we have to debate the matchup between Tide Pods and Philadelphia Flyers mascot Gritty.

Answers to additional questions are below, but if nothing else we want your takeaway to be this: We’re going to spend a little over two hours debating something inconsequential, and it’s going to be great.

Q) Do I have to make arguments or can I just listen to the arguments of others, then vote?

A) Getting up and making an argument is totally optional. Most people just pick and choose the matchups they are most passionate about for when they make an argument, then kind of hang back for the other debates. Voting is optional too. If you don’t have a strong preference on a particular matchup, no one is going to make you raise your hand.

A) Nah, you’ll be fine. Like we said, you can participate in as many or as few debates as you want. And we can explain anything people have questions about.

Q) What is on the bracket?

A) We actually don’t know yet. So you can help us decide. Fill out this survey with as many or as few entries as you’d like: https://www.surveymonkey.com/r/8B6MMBV

A large part of our decision process will be based on what submissions we see over and over. We may even take off a few you’ve seen referenced in this listing so far if we get enough stronger contenders. As for how you want to describe your submissions, it’s up to you. You could be super broad (like saying original content from streaming sites), more specific (Netflix) or super specific (naming your favorite new Netflix series). And don’t worry if you submit too many or too few things. We’ll take care of the sorting process, you just submit what makes you happy. Don’t want to submit anything? That’s cool too. You do you.

Q) How much do tickets cost?

A) Depends on how fast you act. First person to buy a ticket: It’s just $7. Second person: $8. With each passing purchase the price rises, until we max out at $25. If we get to a few days before the event and still haven’t sold 15 tickets, we will cancel, but we think this isn’t too likely.

Q) What happens if we buy a ticket, then realize later we can’t make it?

A) All sales are eligible for refund up until 48 hours before the event. After that we blow your money on something fun and non-refundable.

Q) I thought you guys did board-game-themed events.

A) That’s not really a question, but we’ll answer you anyway. We build events around games. Usually that means board games, but every now and then we have something else we want to try, in which case we refuse to be pigeon-holed.

Q) Why haven’t I bought a ticket yet?