Dorchester Brewing > Get News And Updates on Our Blog > 2016 > October
October 6, 2016 By Holly Irgens in Brew Blog, Meet Our Team Comments Off on All About Quality Control (And Fred!)

All About Quality Control (And Fred!)

As part of our “Meet the Team” series, we’ve been introducing you to members on our team that make it all happen! Today, we’re excited to get to the down and dirty of actually making the beer…good beer at that. In fact, the best. We’re extremely proud of the steps we put in place to ensure the highest quality beer production for all of our beers including our house beers as well as our brewing partners. To that end…have ya met Fred? 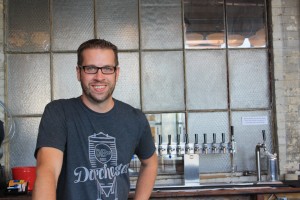 Fred Hamp, DBco’s Lab & Quality Assurance Manager became involved with DBco from his old friend Todd, our Head Brewer, from their days at Harpoon. Fred had been a stay at home dad for a few years and the timing was right for him to re-emerge into the craft beer scene at Boston’s newest startup. Fred has been with us since our building was a bit of a construction zone and he helped us design our QA program from the ground up (literally from the dirt floor!).

Fred’s love affair with brewing started long ago, fresh out of college. He hounded every brewpub and brewery in the Buffalo area until finally Tim Herzog of Flying Bison Brewery took pity on a him and let him clean kegs and access his brewing library. While there, Fred became committed to brewing professionally and saved his pennies to pay for the Master Brewers Program at University California Davis. After graduating, he took a job with Harpoon and did pretty much every job in the business until finding his passion for Quality Assurance and Control. After working with Todd at Harpoon, the rest was history!

When we tasked Fred with developing our lab and QA program, we told him to go big or go home.  As Fred mentioned, “The lab and QA program at DBco is state of the art for a brewery even 5 times our size. We place the quality of our brews on a pretty high pedestal.” When pulling it all together, he purchased the best equipment out there to ensure a high quality end product including: A Haffmans combined CO2/02 meter with piercing station for cans/bottles, a laminar flow hood that is PCR ready for micro work, a pharmaceutical grade spectrophotomer, a microscope for quantification of yeast, an autoclave, incubator, and more! We’ve got quite the science lab in the middle of the brewery.
When he’s not elbows up in beer, Fred loves to immerse himself in the craft beer culture. When we asked him his favorite beer, he said, “I think choice is incredibly important. As an example, who wants to listen to the same album over and over again?  Sometimes you want speed metal, other times EDM, funk or classic rock. When I drink beer, I usually let the season/ time of year influence me. My favorite DBco beer right now is the soon to be released Baltic Porter.  It is incredibly balanced and complex… a real treat.”
And, as a last word from Fred, he believes”Beer is culture.  People come together over beer and this allows an environment for ideas and beliefs to swirl together.  The diversity of the community in Dorchester makes this dynamic even more exciting.”