Dorchester Brewing > Get News And Updates on Our Blog > 2019 > March
March 19, 2019 By Holly Irgens in Meet Our Team Comments Off on Meet Our Team: Sarah Pott, QA/QC Manager

Since we opened our doors in 2016, we have been proud to stand behind the quality control measures that we’ve put in place to produce the best end product that our customers enjoy drinking! We are happy to introduce a face behind the scenes who helps to create the fresh, clean flavors and taste of all of our partner and house craft beers, all which are made right here on-site in our Boston brewery. Thanks to her expertise and dedication, you get the benefit of enjoying all of the DBco beers that pass through our doors! So, today, let’s raise a glass to Sarah Pott, our QA/QC Manager at Dorchester Brewing Company.

How did you get into craft beer and join the brewing industry?

I grew up right outside of Portland, Maine where there is a plethora of amazing beer (and food). Living in such a small community, it wasn’t difficult to connect with people within the brewing industry. Right out of college I basically just volunteered at whatever brewery would have me. That’s how I got my foot in the door before participating in ABG’s brewing school.

Tell us a little bit about what you do at DBco on a day-to-day basis.

My job here at DBco involves a lot of quality oversight into many processes, including packaging, cellaring and brewing. Routinely, I am tracking and performing sensory analysis on all of the fermentations occurring in the tanks, and on a daily basis we can expect to have at least 18 different beers in the fermenters (no, I’m not drinking 18 beers everyday). I’m responsible for making sure we are producing beers that fall within our brewing partners standards, as well as our own. Along with that, the most important responsibility I have is tracking down any contaminants or beer spoilers that may be lurking in the brewery. By doing this, I plate the beer at multiple different stages of the process onto selective and differential growth media. I can then detect if we have any microbes that could spoil the beer, or if there is an issue in the process

What do you like best about the brewing industry?

THE PEOPLE! Most people in the brewing industry don’t just accidentally fall into it, they actively seek it out, which typically means these people are extremely passionate about what they do. They want to be here. I’ve met so many intelligent, creative and passionate people working in this industry, which makes it all worth it.

Favorite part of your job?

Contentedly walking into work everyday knowing I stuck with my passion and that I’m not sitting in an office somewhere.

Pilsners (everyone should make more pilsners)

With International Women’s Day on the horizon, we are working to celebrate all women in the beer industry and females worldwide. Read more about our special collaboration beer release with proceeds supporting several institutions to empower women everywhere. With that in mind, we’d love to introduce you to an awesome member of our brewing staff, who works to bring you fresh, tasty beer weekly in the DBco Tap Room and beyond. Meet Colleen Rankin. 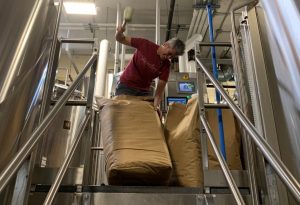 Tell us a little bit about yourself and your background.

I grew up in Akron, Ohio, where I lived through college. Since then, I have had stints living in Russia, Columbus, Baltimore, Washington state, Oregon, and Cleveland. I moved to Boston in July to work for Dorchester Brewing. When I’m not brewing, you can usually find me doing something outside  — biking, climbing, skiing, hiking, etc. — or reading a book, listening to music, or wandering around town looking for good cocktails, coffee, or beer.

How did you get into craft beer and become a brewer?

My fascination with craft beer began in my early 20s, when I had become bored of drinking Rolling Rock and Newcastle Brown Ale. Not too long after discovering craft beer, I started dabbling in home brewing. Looking for a more fulfilling career choice and dissatisfied with working for the man, I woke up one day and decided to become a production brewer. I was lucky enough to find a terrific brewer in Eugene, Oregon that felt that I had the stuff necessary to succeed in brewing, so he gave me an Assistant Brewer position with no production experience, which is quite a lucky thing in this industry. After working at Sam Bond’s Brewing in Eugene, I put in a good stint as an R&D brewer at Platform Beer Co. in Cleveland, Ohio, and now I’m here brewing up fantastic brews at DBco. Working hard to gain knowledge and experience, I hope to eventually open my own brewery.

What’s so special about the brewing industry?

I like brewing because it is both hands on and intellectually driven. An average day’s work allows me to work hard doing manual labor, which is really satisfying, and use my brain in the course of operating mechanical systems, trouble-shooting problems, or writing recipes. I have had successful jobs behind a desk and other, equally great jobs, working outdoors and in customer service; I find that brewing really feeds all facets of me as a human. It brings me good balance that keeps me feeling good about going to work every day.

What’s the favorite part of your job?

Since I started brewing, my favorite thing to do is to hose out the whirlpool vessel. It is so satisfying to me to start with a massive mess of a hop pile and end with a shiny and clean tank. The process of transformation from mess to cleanliness is a really satisfying thing. It is so laughable, I know, but it is the little things in life. On a broader level, I love the process of creating a beer from start to finish — beginning with an idea, writing a recipe, brewing it, caring for it during the fermentation process, then pouring it into a glass that the masses (and I) get to enjoy. I think that is a really rad thing.

My favorite beer style generally changes with the seasons, but I love them all. Dark, light, Belgian, American, sour, IPA, or cask, I try not to get stuck in the rut of drinking one style more than the rest. Every style of beer has the prefect time and place for appreciation and enjoyment. To date, my favorite DBco. beer (that I wasn’t the mastermind behind) is Born to be Mild, an English Mild Ale that we released a batch of a while back. My favorite partner beer is probably Stupid Head by Stillwater Artisanal, a delicious double-dry hopped Hefeweizen style ale.