Get News And Updates on Our Blog

In our latest installment of blog series, we’re introducing you to everyone on our team. Get used to us, we’ll be sticking around for quite some time. So, to get started, we’d like to introduce you to the guy responsible for all of that beer you’re drinking. For those of you who aren’t familiar with Todd, he’s one of our co-founders and Head Brewer. You may also know him as the previous Head Brewer at Harpoon. But he’s so much more then that! 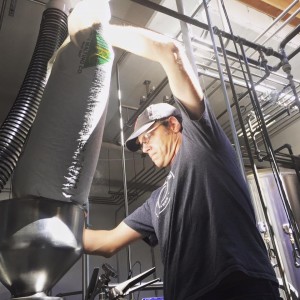 Todd’s background in beer started by walking into one of Boston’s premiere breweries 15 years ago and he landed a job on the bottling line. He worked hard, and his dedication paid off becoming Head Brewer for over ten years at Harpoon Brewery. Todd’s not one to brag about himself (or super wordy as you can tell!), so we did a little Q&A so that you could get to know him better.

Todd, how did you get into craft beer?
A friend was a beginner homebrewer and invited me along on a couple of brews in his kitchen. From then on out, I was hooked.
What do you do when you’re not drinking and brewing beer?
During the summer I enjoy spending time with my family at our lake house. Lots of boating and fishing, swimming, etc.
I hear you’re also in a band…
I am in a band called The Winter Project, which began as just that. However we are still practicing and writing well into mid summer!
What is your favorite type of beer to both brew and also to drink?
I really try to be a student of style. When I’m developing a new recipe a lot of thought goes into the history of the style, ingredients used by those that developed the style. Of course I am a huge fan of American-style IPAs and love to brew them.
Do you have any advice for brewers just starting out?
Read as many books as you can. Practice makes perfect. You want to do a lot of brewing on a small scale, volunteer at your local brewery, and keep it fun. Make incremental changes to your recipes to determine how these changes affect your batches of beer.
What do you have in mind for the next few DBco beers?
Will be continuing in the hoppy beer vein with Mass Ave IPA and V1 double IPA. Also in the queue are a Berliner vice, a German Roggenbier, Pilsner, and in late summer, our Oktoberfest!

Want to pick his brain even more? We’re hosting a Meet the Brewer Night every month on the last Thursday of the month! Todd will be on hand to chat about all things beer on Thursday, July 28th from 5pm-8pm. More info at:  //www.dorchesterbrewing.com/events/event/meet-brewer-night/
brewing craft beer dorchester eam head brewer team todd toddt